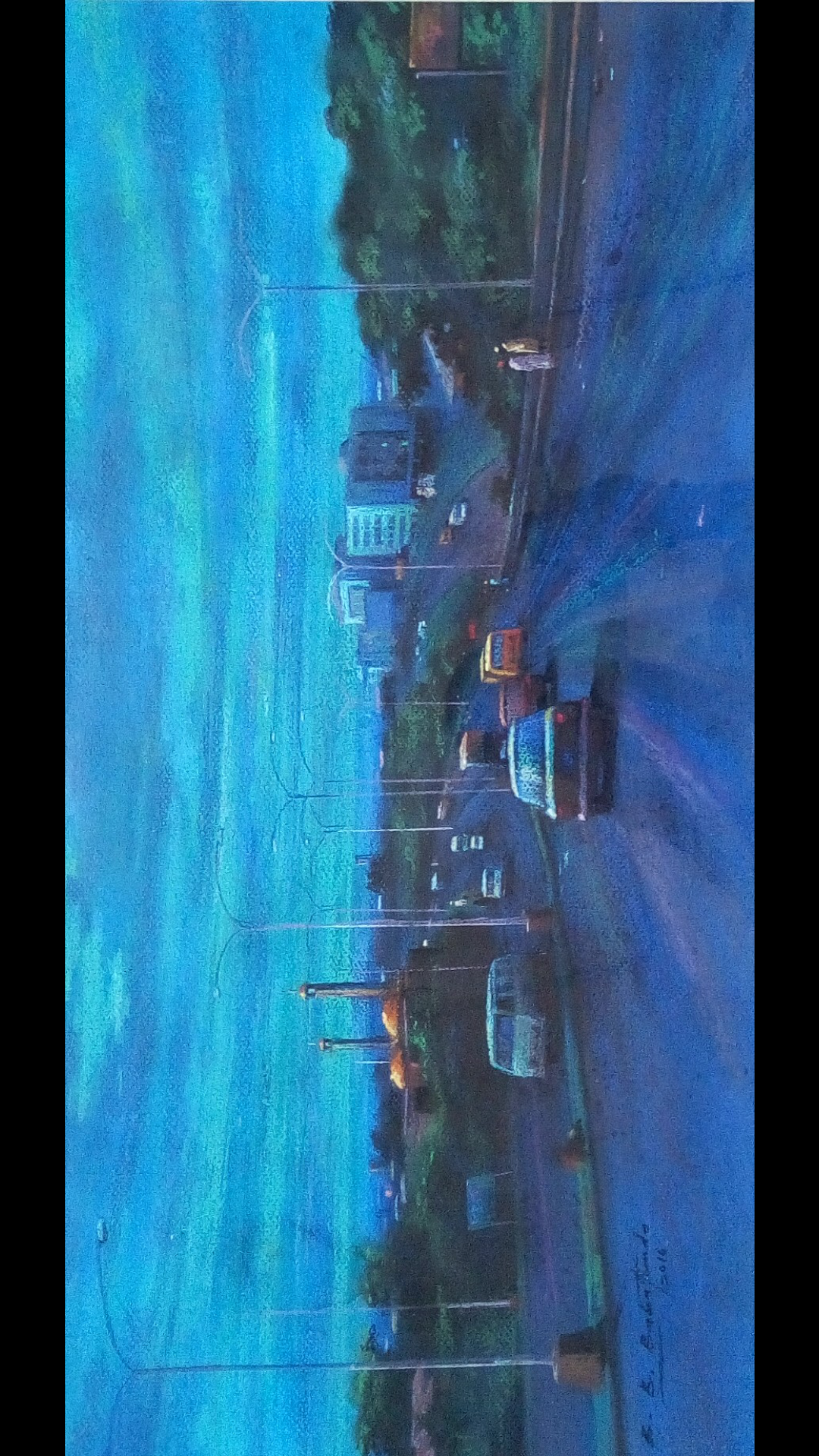 Pastel on pastel paper :-Lagos at blues entrance to Eko city, Lagos is a nice place to be, culturally and historically

Bashiru Bolaji Babatunde, who is was born on the 25th of August, 1970. His talent became noticeable while he was in primary school. He was raised in Lagos State where he attended his secondary school before gaining entrance into higher institution. He has had the privilege of working with great masters such as Abiodun Olaku (painter) , Bunmi Babatunde (sculptor), Bisi fakeye( carver ) at Universal studio in National Theatre ,Lagos . B.B.studied painting at the famous school , Yaba technology ,Yaba , where he obtained a higher National Diploma (H.N.D) in 1999.after his H.N.D., he started as a full time studio artist. He is also a sculptor. He is a member of the society of Nigeria Artists (S.N.A) and Art zero . Aside the business of producing art materials such as canvas . Babatunde Bashiru has to his credit one solo exhibition at Nike Gallery ,Victoria island , Lagos ,titled : 'TREASURE'. He has participated in over 18 group Art Exhibitions within and outside Nigeria. B.B. BABATUNDE'S MAJOR WORkS IN PUBLIC PLACE ARE: . 26 portrait painting of principal kings college at Lagos from 1909-2017 . Moral painting of past and present hero sports men and women in Nigeria at National stadium, under the bridge in surulere , Lagos state. Moral painting of our musical legends showing their social life.historical background and values of lagosians under the bridge at Ojuelegba, Lagos . PRIVATE COLLECTION . portrait of the principal King's college Lagos from 1909 - 2009 .portrait of former governor of Ogun state , Olusegun Aremo Osoba .portrait of former leader of Afenifere Group. Chief Abraham, Adeniran ogunsanya . SELECTED EXHIBITION .Wealth ,the private veiw -united kingdom ,2001. .Milestone at Aina Onabolu Exhibition Hall , National Theatre Lagos ,2003 . .Creative Ascension of Mahogany Art Gallery ,V.G.C, Lagos 2004 splashes at Terra culture Gallery , Victoria island , Lagos, 2009 .October Rain ,National Museum 2008 October Rain ,National Museum , Lagos 2009 .October Rain, Nike Gallery , Victoria island , Lagos 2012 - 2014 Shades of Time at National Museum ,2016.

Artwork has no ownership history

We want you to love your art! If you are not completely satisfied with your purchase you can return it free within 14 days, no questions asked. Learn more